Candle in the ocean 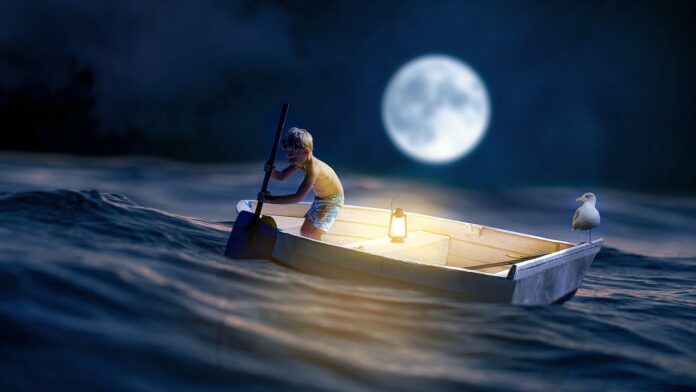 He looks at the past and remembers how his mom helped him find his stuffed pet. Candle in the ocean helps him to find a ship and save himself.

The compass seemed to fall in slow motion. The man hadn’t meant to throw it overboard. He was struggling to see it in the dark, so he had thrown it in frustration. It fell quietly, with only a plop as it dropped into the ocean, a gentle plop that would plague his mind for the next five minutes.

He wasn’t supposed to journey like this. It was lonely and dark. Isolation is best enjoyed somewhere safe and warm. And comfortable too, he thought, as he sat on the old wooden floor, bringing his knees up to his chest in defeat.

“When you lose something,” his mother said, smiling at the sniffling boy, “you simply retrace your steps. Where were you when you last had it?”

He promised his parents he would make them proud. At 21, he was a scrawny young man, who still fit the same clothes he wore at 17. He was on a break from college. He remembered the day he had sat his parents down to tell them. In his sweaty palm, he clutched a crumpled piece of paper containing his speech, a rambling explanation of his desire to explore the world beyond textbooks.

He felt his glasses steaming up now, so he took them off of his face and used his sleeve to mop up the tears. He cursed himself for his ill-conceived adventure, the fact he took the first opportunity he had to escape without knowing what direction he was going in.

“There is no point in crying, dear. You’ll only make it harder to remember.” His mother warned gently, taking his hand into her own, away from his face.

He trailed after her, watching with hopeful curiosity as she turned pillows over, checked behind the TV, even knelt and pressed her face against the floor to peer under the coffee table.

He took a breath and stood up, stepping into the center of the small boat. This was supposed to be his chance to develop independence. He had made it so far, learnt so much along the way, so what was the point in stopping now? He broadened his shoulders and folded his arms, stuck his chin out, and looked forward. This display of confidence was new to him. He avoided danger. His nose was always in a book, his eyes were always downcast when he walked, and his hands lived in his pockets, helping him shrink into the background of other people’s lives.

The moon was the only source of light on this lifeless ocean. She beamed at him weakly, like she wanted to help, but alas, she was not the sun. He held her gaze in understanding and looked forward into the water. Genius struck him then, and he rushed to his backpack.

“What if we never find Mr Duck?” The boy asked quietly, his breath shallow and quickening, a tell tale sign he was going to start to cry again.

They had spent two minutes looking for the stuffed animal, which was about two months in children’s time, and the boy was beginning to get worried. What if he had left him outside and a dog had gotten to him? What if there was a storm later today, and Mr Duck melted right down to his stuffing?

He retrieved a candle and his lighter. He hadn’t been able to use them while navigating the boat because he had held a compass in his spare hand. Now the compass was out of the picture, he wouldn’t have to navigate blindly.

“We’ll find Mr Duck, but you have to help too. You’re wasting your energy worrying, dear,” the mother sighed, bending down to hug her sensitive child. “You should be leading this journey, you know yourself best. Where did you leave Mr Duck?”

The boy scrunched up his nose and tapped a finger to his chin, deep in thought. Being the leader gave him newfound determination.

He lit the candle and made his way towards the edge of the deck. He braced himself, clutching the candle with one hand and gripping the deck with the other as he leaned forward.

Nothing, no familiar shapes, no shapes at all. The darkness made the ocean look like an abyss, and all the candle did was give it an inviting glimmer. He had not been taught to give up so early though, so he retracted his wavering hand, heading to check the opposite side of the boat.

“The kitchen!” The boy exclaimed, grabbing his mother’s hand and running across the room.

Once he reached the opposite side of the deck, that was when he saw it. It was very far away, but unmistakably there. A dark shadow, not belonging to the ocean. He didn’t know if it was land or another ship but he blew out the candle and sat it down on the floor next to him. He punched the air and cheered, a jab at the suffocating silence he had been dealing with for the past hour or so.

“Mr Duck!” The boy shouted, rushing over to the circular table at the kitchen, yanking the toy towards himself with such vigour he almost took the white tablecloth off with it.

The man steered the boat in the darkness, gleefully chasing the shape he had seen in the dim light. He ripped off his jacket and hoisted it up on the mast. With the little cooking oil he had left and the lighter he had just used, he set the jacket aflame.

In mere minutes, the fire banished the abyss. The man called out at the shadow as he sailed towards it, quickly recognising it as a cruise ship. Gasps on the upper deck were heard as he hollered, and when he reached the boat, there was a rope sent down for him within moments.

“You found him! See, sometimes you just need to go out and find things for yourself. There will always be people to help you along the way, like me, but you need to reach out first.” The mother beamed, her white teeth reflecting the dim moonlight that shone into the kitchen.